Today was a travel day, which means I listened to a good number of podcasts. A new one on my list is Flash Forward, which my husband recommended particularly because of their latest mini-series on bodies.  I haven't listened to the whole series, yet, but the first episode I listened to, InkRX (5/21/2019) got me thinking about connections to scripture, to other podcasts, and to my own experiences with seeking medical care.  This podcast would connect powerfully to the story of the woman with the flow of blood (Matthew 9:20–22, Mark 5:25–34, Luke 8:43–48) as well as to the Easter narrative in Luke (connecting to women as "idle tale" tellers) the woman at the well and other stories of illness and healing where people have trouble believing and trusting the person who is in pain.

Flash Forward uses technology that's in development, now, to imagine what the future with that technology might be like. What I especially love about what I've heard of the show so far is the way the host, Rose Eveleth, explores the implications of the technology from different angles, covering ethics concerns in a way that feels more creative, meaningful and comprehensive than most science and technology reporting. This episode explored using sensor tattoos to get instant and continuous readings of heart rate, hydration, and other bio markers right on a person's skin. They delved into disability rights and privacy, and, near the end of the episode, got to the question of whether or not having this kind of data makes a difference. Does having more data really mean better outcomes for patients? Is what doctors need from patients more, and more precise, data?

This is quote from the transcript, but the whole episode is very much worth a listen:

"Rose: Plus, the idea that simply having more data will always solve the problem excludes the fact that sometimes the problem is people. It’s bias or inequality or discrimination or sexism.

So for example, there’s a menstrual cup product that connects to Bluetooth and measures exactly how much blood you’re collecting each time. And the pitch for this, the argument people made at the time, was that the cool thing about this was that now people who bleed a lot during their period could finally PROVE it to doctors. They’d have data. To which I kind of wonder, why spend all this money on a device when… doctors could just… believe their patients?

And this pitch shows up sometimes in stories about this tattoo technology too — if people just had more data about their biomarkers, then they could show that tattoo data to a doctor and everything would make sense. In reality…

Ace: It just doesn’t work. It doesn’t work. You know I got my Ehlers Danhlos diagnosis at 26. I’m 32 now. I started you know trying to figure out what was going wrong at 18, when I look back at my entire lifetime I can literally find symptoms while I was in utero. It didn’t matter how much data I have. I know I have entire notebooks where I would go hour by hour and I would I would have an outline of the body and I would outline all of the places where I was having subluxations or dislocations and what it felt like and what I was doing that day and what I had eaten that day and when I had drank that day and what came on just pages and pages and pages of heart rate and blood pressure and information. And you walk in with it and it doesn’t matter. If you look like a femme, if you’re talking about a pain disease, they’re not going to believe you. It doesn’t matter what kind of data you have especially if you’re talking about a rare disease the doctor has absolutely no familiarity with ...it doesn’t matter. I mean that’s a beautiful thought. And it is clearly a thought from somebody who has never had to interact with our medical industrial complex."

I've had to have those interactions, myself, and I resonate with what Ace says, here. I recently started a science fiction short story with a character saying, "Healthcare is no place for sick people." It's a good line, and it's a direct quote from my mom. In some ways, we can look to the story of the woman with the flow of blood and see that medicine--in whatever form it takes--has always fallen short when it comes to listening to and treating pain. At the same time, it's interesting to look at how advances in technology--which should make diagnosis more accurate and reliable--have also contributed to doctors not being able to listen to patients.

One of my favorite episodes of 99% Invisible is The Stethoscope (8/06/2017.) It traces the development of the stethoscope and the impact of the stethoscope on medicine and the relationship between doctors and patients. One of the pieces that fascinated me, most, is that the stethoscope marked the beginning of data-based medicine, where the doctor no longer needed to conduct in-depth interviews and listen closely to the stories of patients: the data was more trustworthy than what the patients would/could report. "This evolving device got doctors thinking about disease in new ways, changing their dynamic with patients and giving doctors a lot more power. Before the stethoscope, to be sick, the patient had to feel sick. After the stethoscope, it didn’t matter what patients thought was wrong with them, it mattered more what the doctor found." While the stethoscope started this trend, it's also a throwback to the older style of medicine: to use a stethoscope, a doctor has to touch the patient and listen to their body. Because of lack of training and practice, doctors are losing the ability to do this well, too.

The Anthropocene Reviewed picks up this idea of listening to patients and people in pain in Hawaiian Pizza and Viral Meningitis. Hawaiian Pizza is a good review, but Viral Meningitis is where John Green gets into the question of how the problem of how pain is resistant to language. Indeed, as Elaine Scarry writes in The Body in Pain, pain destroys language. "To have pain is to have certainty. To hear about pain is to have doubt."

The Body in Pain is one of the formative texts I carry with me from a class in undergrad on literature and pain. Another text from that class that formed me deeply is The Wounded Storyteller by Arthur Frank.  Frank lays out different kinds of pain narratives, and writes about which narratives we prefer (the restitution narrative, the quest narrative) and which we have trouble listening to (the chaos narrative.) I've spent a lot time thinking about what it would take for us to be able to listen to and accept chaos narratives as the truth of people's experience. To listen to the story when it is inarticulate and unresolved, when the Spirit is interceding with sighs to deep for words ... and to have that be enough.

Green quotes Susan Sontag: "Nothing is more punitive than to give disease a meaning." Or, to use Frank's terminology, it is cruel to force a restitution narrative onto someone in the midst of chaos. To use the language of Jeremiah, "They have treated the wound of my people carelessly, saying, ‘Peace, peace’ when there is no peace" (Jer 6: 14.)  Green says that when we force a tidy story onto the untidy reality of someone else's pain, particularly chronic pain, "We end up expressing our doubt in the face of their certainty, which only compounds the extent to which pain separates the person experiencing it from the wider social order.  The challenge and responsibility of personhood, it seems to me, is to recognize personhood in others. To listen to others' pain, and take it seriously, even when you yourself cannot feel it."

While connections to healing narratives here are clear, these questions have resonance with the wider biblical narrative and with any situation where a person has a story and that story is met with disbelief. The title I chose for this entry comes from a 2017 article by Carol Howard Merritt in The Christian Century.  She writes, "Many men have read my story and then asked for “proof.” And that’s the difficult thing. My story is the proof. Yet, when you don’t believe a woman can discern truth, then you question the credibility of the sole witness. This sets up a climate where abuse can be perpetuated. This is the precisely what I’m speaking out against," ("More Thoughts on Tim Keller" .)

Issues of trust bubble close to the surface under all of these texts: who do we trust to tell their own stories? Who can we trust with the story of our own bodies? Can we trust and listen to the stories our bodies tell?

When I think about the story of the woman with the flow of blood, the interpretation that's helped me the most comes from Professor Candida Moss, who was a teaching assistant at Yale Divinity School when I was a student there. She taught us that that "leaky" things, and people, were considered unclean and suspect. A woman who had been bleeding for 12 years would very much fall into the "leaky" category. But, she pointed out, in this text Jesus is also leaky. Jesus' power leaks from his body--all people have to do is touch him, even just touch his clothing, and they can be healed. Jesus' leakiness not only heals the woman, it places him in a category with her--there is something dangerously leaky about Jesus.  Jesus' body continues to be leaky in significant ways, both on the cross and after the resurrection. The body of Christ--and the Body of Christ--is scarred and leaky. Can we listen to, and believe, the stories of the body, and the Body? 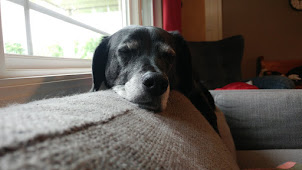 Pastor Annie
I'm a pastor at Luther College in Decorah, IA. I'm married to Sean and mom to Walter and Sally. Our dog's name is Hank. All of the members of our family are quite earnest, but pretty funny, too.